Home ▸Uncategorized ▸ The Indestructible Townhouse, Over 211 years, the Dickey House in Lower Manhattan has survived everything New York City has thrown at it. Soon it will become part of a new home for Public School 150. (Current Page) 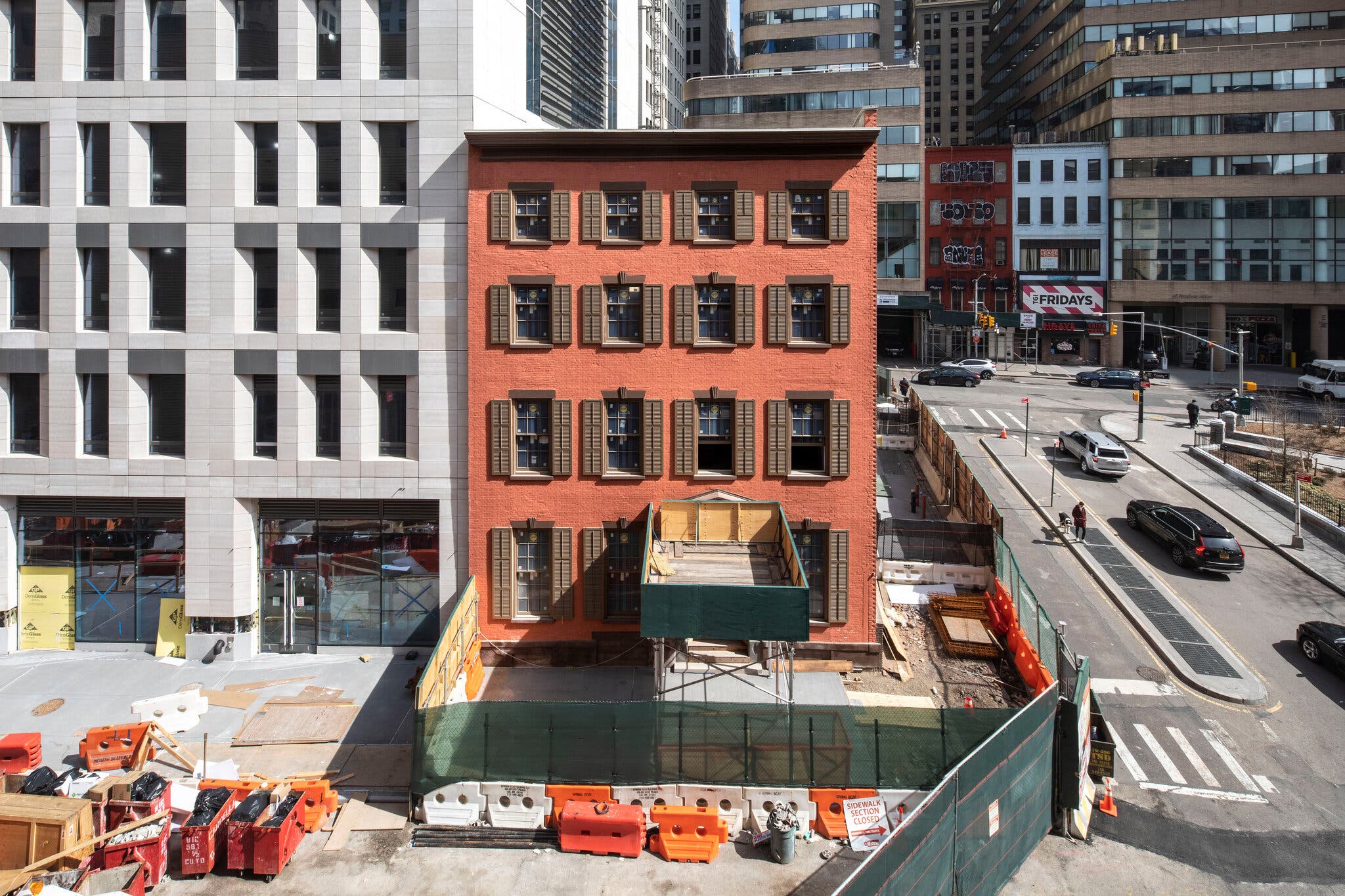 When it comes to architectural survivors amid Manhattan’s eternal churn of destruction and redevelopment, it is hard to top the 211-year-old, four-story brick landmark at 67 Greenwich Street in the financial district. Originally the townhouse of the merchant Robert Dickey, the decorous Federal-style dwelling was built in 1810 near the island’s southern tip, when nearby wharves bustled with trade and lower Greenwich Street was among the city’s poshest addresses.

In the two centuries since, as Lower Manhattan came to be defined not by forests of ships’ masts but by forests of skyscrapers, the house has weathered an astonishing amount of upheaval. The disruption it has survived includes a neighborhood-ravaging fire, a street-widening project that claimed its rear stable, the construction and deconstruction of elevated railways running past both its front and back doors, the digging of subway tunnels on either side of its foundation, the wholesale razing of neighboring post-Revolutionary War houses for the Brooklyn-Battery Tunnel and, finally, the 9/11 attacks a few blocks north.

Now the Greenwich Street and Trinity Place facades of the long-deteriorating house have been handsomely restored by its owner, Trinity Place Holdings, the real estate outfit that emerged from the 2011 bankruptcy of the Syms discount clothing chain. The entirely rebuilt interior of the Dickey House will become part of a new home for Public School 150, which will also occupy most of the bottom eight floors of a new 42-story condominium next door at 77 Greenwich Street, where a bunkerlike Syms store previously stood. 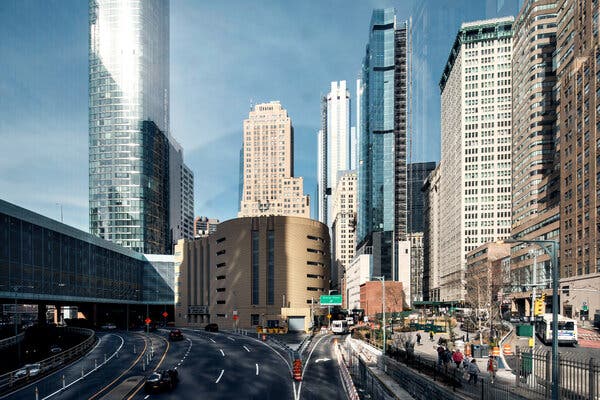 The glass tower, which was designed by FXCollaborative and will open this summer, rises from a cast-stone base and is cantilevered in steps over the historic building, its protrusions increasing from two feet at the 11th floor to ten feet at the 32nd.

The northern wall of the Dickey House, which may have retained original hand-hewn posts and beams as well as horsehair plaster, was sacrificed to the project. New concrete floor slabs run uninterrupted between the two buildings, seamlessly conjoining the lower stories of the school, which is to open in September 2022.

The city landmarks commission approved the tower’s cantilevers and the work on the house, and the New York Landmarks Conservancy will recognize the house restoration at next month’s annual Lucy G. Moses Preservation Awards.

Lower Greenwich Street — planned as the road out of town toward the village of the same name — is a legacy of a young and ambitious republic. Following the shoreline of the Hudson River, the street was built on landfill in the 1790s, less than 15 years after the end of the city’s seven-year occupation by British troops in 1783. Extending uptown from the Battery — a waterfront park where society figures enjoyed promenading — lower Greenwich was soon flanked by genteel Federal-style houses that earned the name Millionaires Row for the homes near the park on the street’s western side.

The shipowner John Aspinwall Jr., a great-grandfather of President Franklin D. Roosevelt, resided at 58 Greenwich. DeWitt Clinton, the city’s mayor and later the governor of New York State, lived at No. 84. Bishop John Henry Hobart, the rector of nearby Trinity Church, called No. 46 home.

The city’s elite “populated the tip of Manhattan, erected their fine residences” and “mingled in business and social life,” the historian-preservationist Gardner Osborn wrote in 1940. Some merchants, he noted, could even “look out their windows and enjoy the thrill of seeing one of their own ships coming up the Bay laden with silks from China” or “spices and tea from the East Indies.”

Dickey, who traded in coffee and spices, was among the city’s richest men. In 1809, he began building two brick houses that came to be numbered 65 and 67 Greenwich. Behind them, separated by gardens, he added a coach house, two stables and a storehouse facing Lumber Street (now Trinity Place). 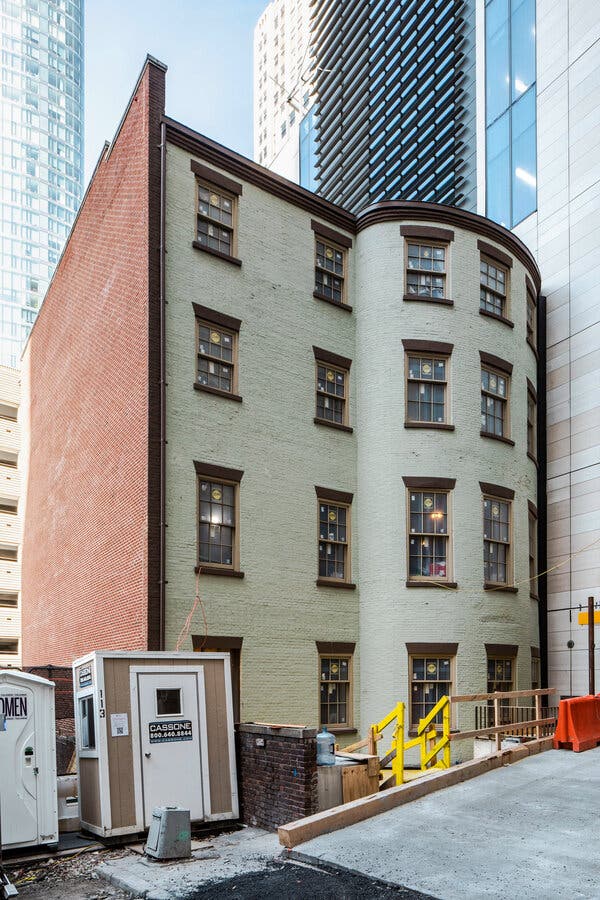 Dickey’s family lived in what is now No. 67, a broad, three-and-a-half-story house with a steeply pitched roof that may have been pierced by dormers. The Flemish-bond brick house was adorned with splayed lintels and fluted keystones on both facades, features shared by the family home of the noted diarist George Templeton Strong at 108 Greenwich.

The Federal style in America flowed from England’s Georgian tradition, with modifications that included a fondness for circular and oval rooms. Accordingly, maps and a stereographic photo show that both of Dickey’s houses were given fashionable, elliptically bowed rear facades. No. 67 is one of only two remaining Federal-style townhouses in Manhattan with a bowed facade, and the only such facade that is three bays wide.

The loss of a ship scuttled Dickey’s finances, according to the landmarks commission, and in 1821 he sold his two Greenwich Street houses. Soon after, No. 67 was acquired by the ship chandler Peter Schermerhorn, whose old Knickerbocker family had built the counting-houses at 2-18 Fulton Street in today’s South Street Seaport Historic District.

Lower Greenwich Street remained fashionable from the 1820s to the early 1840s, a period during which the Schermerhorns rented No. 67 to a parade of society figures, including William Bayard Jr., the director of the Bank of America. In 1830 the house became the French Consulate for a year.

A fire began east of lower Broadway in 1845 and spread to a Broad Street saltpeter warehouse, which exploded with a percussive force felt in Brooklyn. On lower Greenwich, the diarist Strong witnessed from his parents’ window, a half-mile to the southeast, “a broad column of intense flame that made the moon look pale and covered everything with a glow and glare that passed every effect of artificial light which I had ever witnessed. 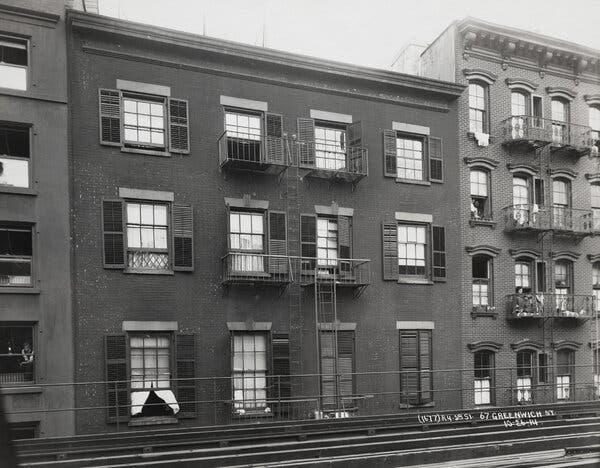 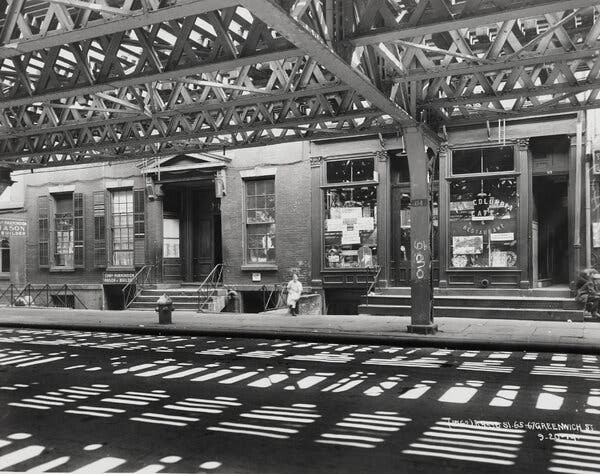 When the fire leapt to Broadway’s west side, Strong reported, “everybody in Greenwich and Washington Streets as far up as Rector” fled “in hot haste.” But though the blaze destroyed 300 buildings, it halted providentially 350 feet from 67 Greenwich.

By 1850, fashionable society had largely headed uptown. Most houses on Greenwich had been converted to boardinghouses, some with shops or saloons. Bank directors had been replaced as tenants by shoemakers, stevedores and coopers.

The neighborhood’s transformation was embodied by the changing use of Castle Garden, a theater at the Battery, which opened in the 1820s with high ticket prices that generally kept the riffraff out. But in 1855, Castle Garden became a teeming immigrant processing center.

Trinity Place was widened in the 1860s for an elevated railroad, slicing away 67 Greenwich’s outbuildings. And in 1871, the Times reported, police raided 18 “low basement brothels” on Greenwich, including No. 67. Men, women and girls “of the most degraded and homely description” were arrested.

No. 67 was modified the next year by the German-born architect Detlef Lienau, who had helped spark a mansard mania in the city with his 1852 French Second Empire design for the Shiff mansion on Fifth Avenue and 10th Street. His Greenwich Street alterations were less pretentious, befitting a building now classified as a tenement. He created a full fourth story by raising the roof’s pitch and extending the bowed rear facade upward. He also added a bracketed, pedimented stone hood over the front entrance.

By the 1890s, lower Greenwich was part of a burgeoning Syrian community, and in 1922 a storefront was added to No. 67’s rear facade. Businesses that have operated in the building since include a cigar shop, a coffee shop, a men’s wear shop, a mason’s business and a hardware store.

Most of the Federal-style houses on lower Greenwich were clear-cut around 1940 for the Brooklyn-Battery Tunnel exit and the Battery Parking Garage. But in the same providential way that the Great Fire of 1845 stopped short of No. 67, the tunnel project’s scythe halted just south of the building. 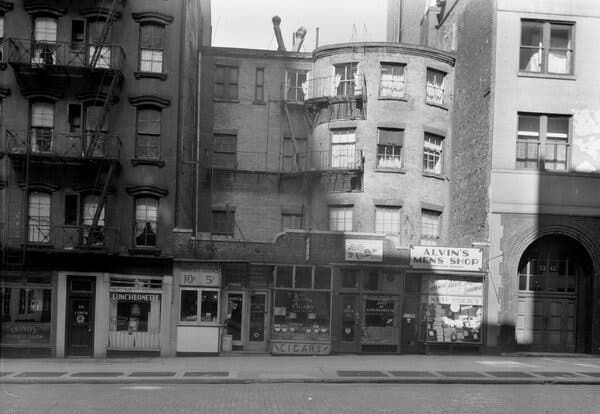 The Syms Corporation bought the house in 2008 for $8 million. Although No. 67’s south wall along Edgar Street was completely replaced in 2013, the long-vacant structure remained “halfway between a building and a ruin,” said Dan Kaplan, senior partner of FXCollaborative. “You felt like you were in a noir movie with light streaming through.”

The fragile shell of the house was temporarily stabilized by the installation inside it of a 150-ton spider web of structural steel, which supported the east, west and south walls. The house was gutted and new floors of reinforced concrete were poured at new elevations that aligned with the adjacent tower’s bottom three stories. What had been a four-story house became three stories, with the top story of the Dickey House left open to the sky as a rooftop play area. Finally, once the new concrete floor structures and columns were in place to brace the original brick shell, the steel spider web was cut away with blow torches.

The 1922 Trinity Place storefront, which contained a derelict bar-restaurant, was removed. The east and west facades were restored to their tenement-era appearance, retaining about 80 percent of the original brickwork on Greenwich and 95 percent on Trinity Place. A third of the stone lintels on Trinity were replaced with cast stone. The damaged stone brackets and pediment at the Greenwich entrance were replicated in galvanized steel.

Some will likely applaud the adaptive reuse of the building, while others may denounce the project as an act of “facadism” that saved only two historic walls and nothing in between. But for the pedestrian, the restored streetfront of 67 Greenwich serves as the most evocative remaining touchstone of a thoroughfare once lined with elegantly restrained homes in the English Georgian tradition.

Just one block up are the only other vestiges of lower Greenwich’s glory days, a row of three badly disfigured Federal-era townhouses. No. 94 Greenwich’s side wall on Rector Street bears the scarred outline of its long-lost gambrel roof beneath its newer fourth-story addition, while its street level is a modern glass-and-steel storefront. Next door, the reclad Cafe De NoVo building retains not a scrap of visible historic fabric. And No. 96 wears a shabbily appended rooftop addition and a gaudy gold-and-mirrored entrance, appropriate attire perhaps for the longtime home of the former Pussycat Lounge strip club.